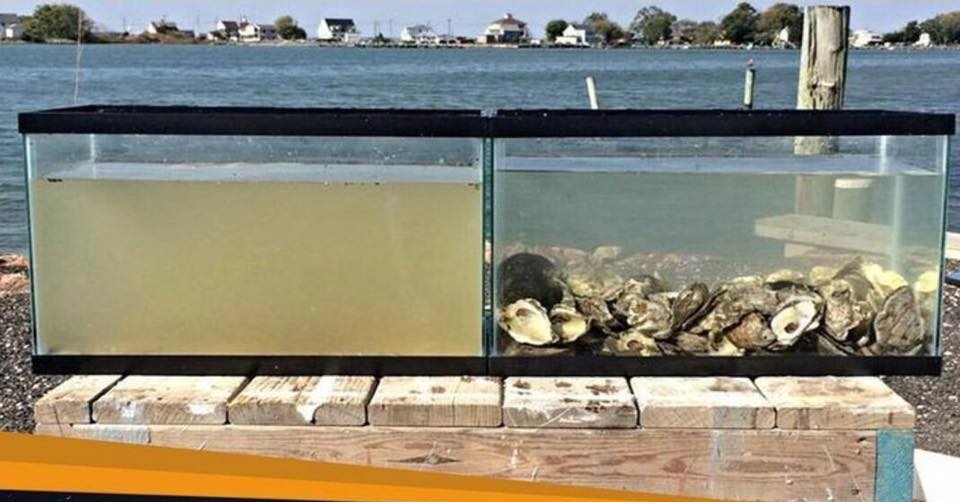 For just about every task these days there is a way of using the planet’s natural resources as a solution. Often, natural solutions are the most effective and safe way to tackle small and paramount problems, as well as everyday issues. One example is the use of salt on tough carpet stains, such as red wine spills, a natural product solving an everyday nuisance. Fish tanks, however, are a tricky thing. They come in such a wide variety of sizes from the small version in a kid’s room, to large tanks in a recreational space that may take up the length of a wall. Tanks like these can turn a simple task such as cleaning the water, into a massive job. Usually homeowners will address this problem with multiple powerful filters, and most commercial tank owners will do the same. But the website Green Renaissance has posted an Eco-friendly way to solve the issue without filters or powerful cleaners by using information from a science experiment.

As their example,Green Renaissance shows a photo of two fish tanks of average size, much like the ones that would be in any home. One of the tanks was in desperate need of cleaning, filled with cloudy brown water, and there was one next to it that was previously in the same condition. Apparently both of the tanks were filled with river water and algae, but the experiment conducted by scientists included adding oysters to the second tank, and within two hours the second tank was clean, filtered, and clear. The conclusion of the experiment states that the oysters consumed the algae and other debris such as sand, pebbles, etc. As you can imagine when Green Renaissance posted the experiment on social media, there were many varied comments about how well this could actually work for the average residential household or commercial property. One of the main deterrents to going Green for many people is that unfortunately, the greener way is not usually the more convenient way.

One of the questions that arose from this social media post is that for most people, oysters are a luxury that they enjoy on date night, it really isn’t likely that they would use this as a method to clean fish tanks. No one was really sure who the experiment was focusing upon, but for the average fish tank owner, it was not a relevant suggestion. It could be that scientists were focusing on commercial businesses, maybe even high-end restaurants that serve fresh fish made to order. This eco cleaning process would make more sense in those cases, but would chefs and restaurant owners go through the trouble of cleaning their tanks with such an expensive filtering process as oysters?

Facebook readers had more than a few things to say about this posting along with the scientists’ experiment:

Many of the comments on the Facebook posting of this experiment shared by Green Renaissance, suggested a bit of trickery going on in the photos. One reader in particular responded, “A little bit of trickery here. You take dirty water and disturb it, it will move all the particles around, instead of being settled. Giving it a few hours will help settle all that debris and all those particles, helping make it much clearer…appearing as if they (the oysters) are some super cleaners.” Ryan Donnelly

Other readers of the post were not able to take the idea seriously at all. Such delicacies as lobsters and oysters are widely known to be the bottom feeders of the ocean, which is why it isn’t much of a surprise to readers that they could be used to clean and filter a dirty fish tank. Lizzie Sparkes comments, “Ah bottom feeders and still people eat them.” Others continued to be grossed out at the fact that they do enjoy fresh seafood like oysters and that this posting has made them think about whether or not they would continue to do that. No one was really discussing the idea of whether the fish tank experiment truly had any value for the average public.

Larry Ausley, a Facebook reader did make a great point which sounded as if he knew quite a bit about algae when he commented, “The problem being that it matters A LOT what species of algae that is, to the health and well-being of the oysters.” Ausley’s point is a valid one. The whole process may be dependent upon the variety of algae and oysters, and also there is a concern that the the wrong variety of algae could harm the oysters. When we think of Eco-friendly, we think of being kind to the environment, and if there is a chance of harm to a species that never asked to do this specific job, then how Green is this fish tank cleaning process anyway?