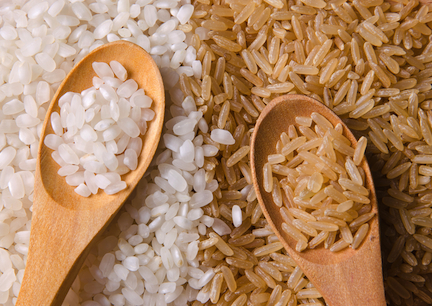 Studies say that brown rice is definitely the healthier choice because brown rice still contains all of its bran and the nutritious germ, so it is thereby, a whole grain, while white rice has been stripped of both of these healthy parts of the rice. For those used to white rice, brown rice doesn’t taste so much different. It is a bit nuttier in flavor depending on what kind and brand you buy, but as we stated above, it is a healthy substitute for white rice in any dish.

The switch from white rice to brown rice is similar to the switch from white bread to whole wheat or whole grain breads. The whole grain and whole wheat bread is much tastier, nuttier, richer and feels a bit heavier in the mouth than your average white loaf of sliced bread. The process is also similar to that of creating white rice. Basically all of the health and goodness has been stripped from the bread/flour that was used to make it.

Changing eating habits may be hard at first, particularly if you grow up with a specific food. However, the health benefits of brown rice over white rice is so phenomenal that it is worth the diet change. Start with things like casseroles where the rice doesn’t play the major role, and then slowly end up at brown rice and roasted vegetables, which is quick and hearty. After a short while, your taste for white rice as opposed to brown rice, will disappear.